A fellow PR/artist management friend of mine, Michael Stuart Webb, recently signed an exciting new client and when I heard about said client, I knew I had to share his story with my readers/followers. Thanks for setting this up for me, Michael….it’s always great to support friends in da biz!

GRAHAM TRUDE is an award-winning Canadian singer/songwriter and he’s proud to release his brand new single titled PTSD today, Tuesday May 25th.  The song focuses on his struggles with post-traumatic stress disorder (or PTSD) which is a mental disorder that can develop after exposure to a traumatic event such as warfare (which was the case for Graham), traffic collisions, sexual assault, child abuse, or other threats on a person’s life. Watch the video – see link at end of this article. 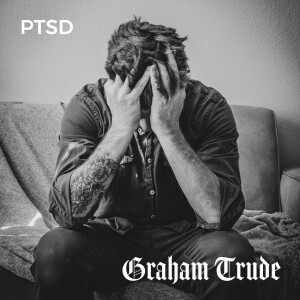 Before embarking on a music career, Graham was a tank crewman in the Canadian military (pictured below), completing multiple tours in Afghanistan, an experience from which he mines a great deal of his deeply honest and raw songwriting. Upon his return home to Canada and discharge from military service, he continued his work on the frontlines as a police officer, during which time Graham was nominated for two lifesaving award and a commendation for a Chief’s Award. 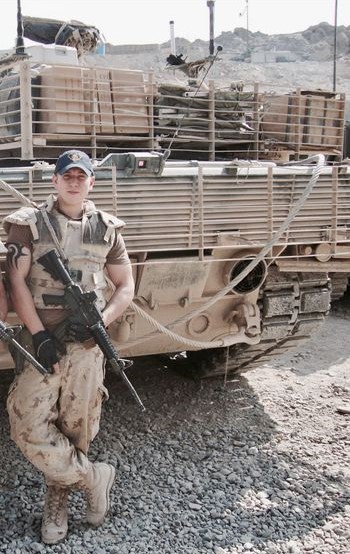 His heroic service overseas and his law enforcement career had a profound impact on his life as a whole, and Graham was diagnosed with Post Traumatic Stress Disorder which led to addictive and self-destructive behaviours. Determined to conquer his demons, Graham sought and found refuge in his music which was instrumental in his recovery. His songwriting references these life experiences, creating powerful lyrics which he combines with edgy guitar riffs and infectious hooks. He is a master storyteller who uses a pop, rock and country fusion beats.

Graham has collaborated several times with renowned multi-Juno award-winning country music producer, Jason Barry, and has also written and performed the theme song for the television show The Real Canadian Joes, and won an Ontario songwriting competition – all this earned him the respect of his peers in Nashville where Trude has spent time perfecting his craft. To celebrate the release of his new single, I spoke with Graham and asked him to share his story and his song with us…. 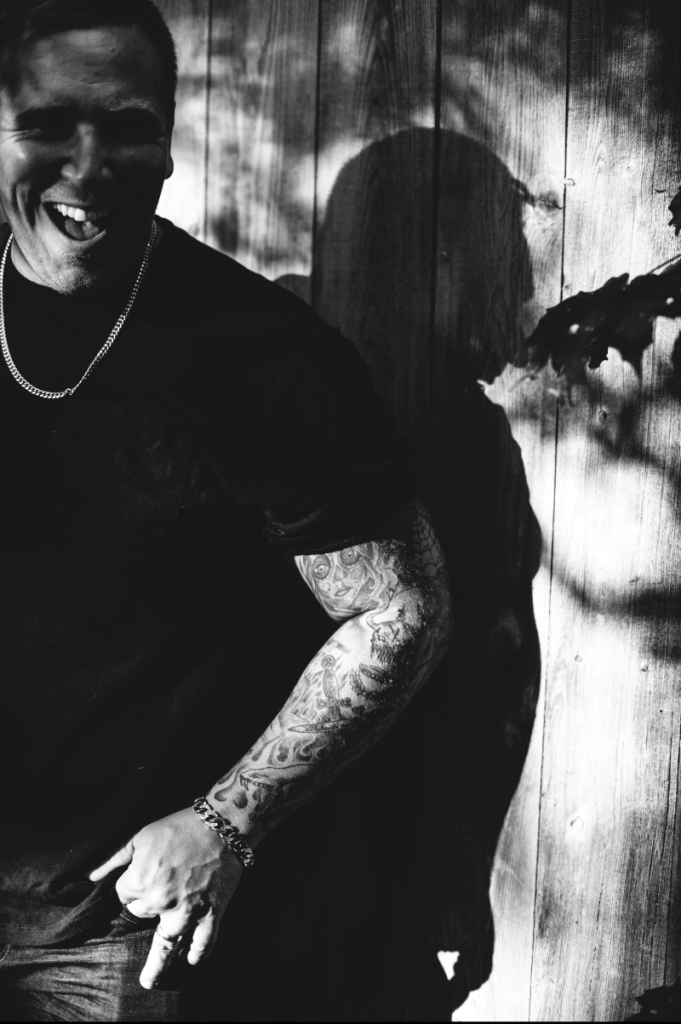 Congratulations on your new single PTSD – I’m sure it will resonate with so many ex-military, police, firefighters and front-line medical staff. As a PTSD sufferer yourself, did you find the writing process cathartic and healing?  Thank you very much I greatly appreciate it and thank you very much for this wonderful interview. Usually in every song I write there is always some healing for me and it’s a way for me to express my emotions and get it out on paper. I find in my experience with trauma and addiction when I am feeling down or not myself, I love to write music and it helps bring me to a better light.

Were you an army brat or was your military career of your own making? And if so, what inspired you to sign-up?  My military career was certainly of my own making. My father was a chief of police in Collingwood for many years and my brother joined the military shortly after I joined in 2007. There was something about the calling of being a soldier that I always wanted to do and I always wanted to help people which is why I got into policing after as well. It is a personal goal of mine within my life to help people who are going through tough times and feel they are alone. 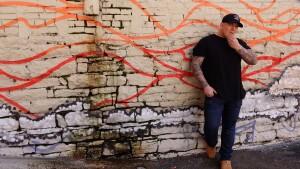 I recently worked with an LA-based filmmaker client who produced, wrote and directed a movie (Battle Scars) that dealt with PTSD in the post-Vietnam War era which illustrated how inadequate support was for returning warriors nearly 50 years ago. Have things changed? Did you seek and receive therapy to help you deal with the trauma and your resulting addictions?  I feel that things have changed drastically within the last 50 years, especially in relation to mental health, but we are still not where we should be yet. I know of several homeless veterans, first responders and members of the general public who are dealing with intense mental health issues. During my time of intense depression and anxiety, I can honestly say that without the help of my friends and family I would have been in serious trouble. We need to think of that when we think about the individuals in our lives and how we can help them. Sometimes just being there for somebody is more than enough – it may not seem like it but it definitely is. I am still heavily involved with therapy and my addiction recovery.

Obviously writing and recording this song is going to open conversations within families that had, perhaps, been suppressed – do you have any advice to those living with PTSD sufferers on how to communicate without judgement?  It’s very hard for me to tell other people how to open up with their emotion. Honestly, I found it best to explain it to my family in more of a struggling way. I tried to tell them about it before but it just wasn’t something that they could really understand because they weren’t going through it as well. The best thing in the world that ever happened to me was rehabilitation where I was involved in a process called “rigorous honesty”. This type of honesty is something you need to dig very deep in your life with, it is something that you have to be prepared to part with and to accept. This is not related to bad things that you’ve done in your past but more the dark things that you would take to your grave. When I had the ability to put all these “secrets” out into the universe and ask for forgiveness it was unbelievable how it was received. None of us is perfect but I truly believe life is about growth and learning. 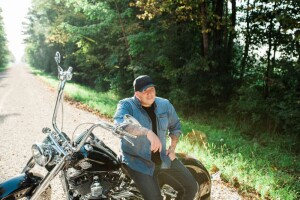 Have you always been a musician? What’s your musical background – guitar lessons as a kid?  I wouldn’t say I’ve always been a musician but I have certainly been a songwriter ever since I can remember. I learned how to play the basics of guitar when I was very young and taught myself simple songs. From those simple songs I would write lyrics and melody about anything that I was going through. Mind you, most of the songs were probably about girls that didn’t want to date me…. haa haa.

Performing as one half of the Singing Soldiers band (with your brother-in-arms Chris Earl) has no doubt raised your profile with the public and the music industry – how has this transformed or refocused you career goals?  The Singing Soldiers was an incredible experience and it was amazing to be doing stuff with Chris as he is a fantastic musician. Everything that we planned and wanted to do with The Singing Soldiers was a success. I just felt that it was time for me to get back to my roots and continue my solo career. 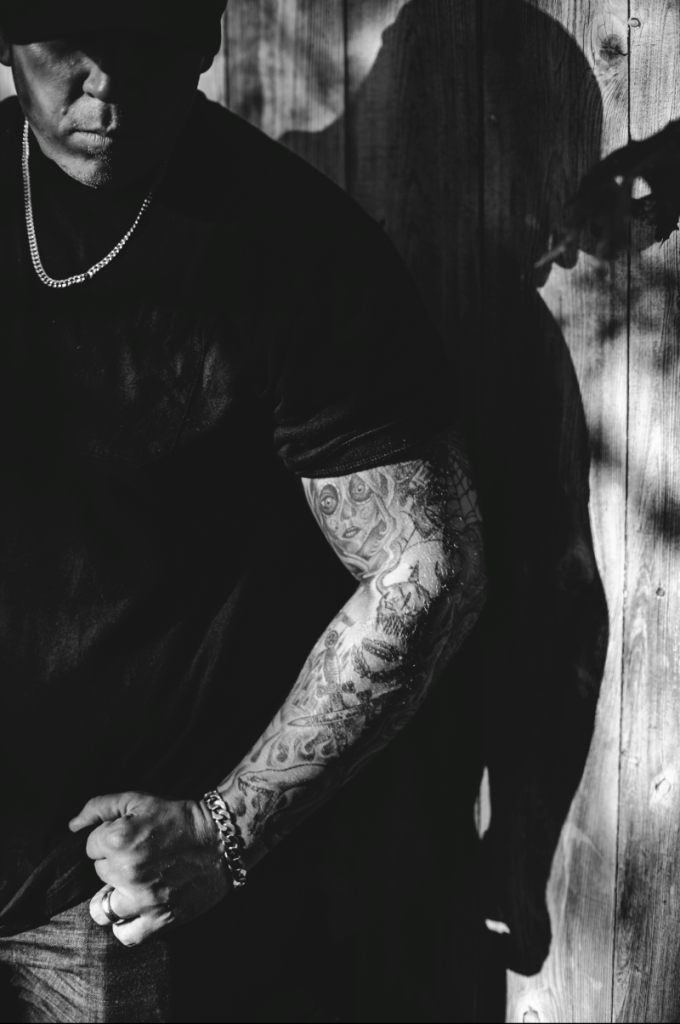 I notice you’re also a big fan of ink – you have an amazing collection of tattoos across your body and have even opened up your own tattoo parlour, Rustuk Ink. Is there one tattoo that holds the most meaning for you? And at the parlour, what is the strangest request for a tattoo you’ve ever received?  Yes, I certainly have a lot of tattoos; I was a military guy so I got tattoos all over the world. My wife and I fell in love with tattooing so we decided to open a shop in Wasaga Beach, Ontario. It was very successful and we absolutely loved the shop so much but we had an opportunity to sell it to a larger franchise, and so we took the opportunity. Luckily, we knew music was picking back up and my wife is pregnant right now with our first child which I am extremely excited about.  Needless to say, I would like to place my time and efforts into my family. The most influential tattoo on my body would be my left hand with my army logo and poppies. This is dedicated to all my brothers and sisters who never made it home from Afghanistan along with many of my friends who did make it home but are still suffering. I would certainly say the funniest tattoo we had come in was an individual walk in who wanted a Pringle tattooed on his shoulder. When I asked him why he wanted that tattooed on his shoulder he said because his boss keeps telling him he has a chip on his shoulder! But really, we’ve had a ton of people with extremely interesting stuff and I love it all!

Graham, good luck with the single, PTSD, and as Ontario opens up for live events (hopefully this summer) do you have any plans for concerts or live appearances?  Thank you very much for everything! Live performances will certainly be picking back up once the world opens up again. We have a wicked show ready to roll and are looking forward to playing some great venues! Luckily, being with the Michael Stuart Webb Media Group has offered me some exceptional opportunities to share my music. Thank you all I look forward to meeting you and hopefully seeing you at a show.
~~~~~~~~~~~~~~~~~~~~~~~~~~~~~~~~~~~~~~~~~~~~~~~
With his new release, this soulful, gentle giant who possesses that rare combination of extreme vulnerability and playful bravado, delivers his message loud and clear: whatever personal war you are currently fighting, you are not going into battle alone!

Here’s a first look at Graham’s music video…and I encourage my readers to download the track via your favourite streaming platform. Thank you for supporting Canadian musicians…and thank you for your service, Graham Trude.

Follow Graham on IG: @grahamtrudemusic or visit his website to learn more about this talented singer/songwriter: https://grahamtrude.com/