As he launches his brand new album, Sugar Rush, next Wednesday night Afro-Cuban jazz trumpeter ALEXIS BARO is thrilled to present renowned Cuban rapper TELMARY who will join him on stage at Toronto’s Lula Lounge to perform his hit Eres (from his previous Guilty Pleasure CD). This will mark the first time Alexis has performed song live with Telmary. Check out their sultry video here:

Telmary rose to prominence in 1999 with seminal Cuban rappers Free Hole Negro. Then she joined Interactivo in 2002 and spent five years touring with the likes of Yusa, Vivanco and Del Rio and Carcassés. It was with Interactivo that Telmary developed her distinctive rapping-crooning delivery, and this collaboration helped the 26-member supergroup score an historic double win (Best Debut Album and Best Fusion Album) at the 2005 Cubadisco awards. Telmary has also played and toured with fellow Cubans Gema & Pavel, Pío Leyva, X Alfonso and Kelvis Ochoa. 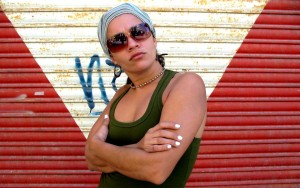 In addition to recording and touring Telmary has started appearing in films. She played herself in both German Kral’s Musica Cubana (2004) produced by Wim Wenders’ and Benito Zambrano’s Habana Blues (2005)  just to confirm that her kind of larger-than-life talent and personality need no embellishment for the big screen.

Sugar Rush was partly inspired by my last few trips back home visiting old friends and having the opportunity to perform again with some of my old schoolmates who are now touring around the world with some of the biggest names in Cuban music. It made me realize that the musical spirit is still alive in my home city of Centro Habana, and that my neighbourhood, Pueblo Nuevo, is still an inspiration to many writers and home to many musicians. By going back to my roots with this album, I’m able to pay tribute to the music I grew up listening to every afternoon, and salute those who spread the Cuban sound all around the world. – Alexis Baro