Wherever I travel, I always make a point of visiting the museums and art galleries to get a better understanding of time, place, culture, history…and back home in Perth was no exception. I grew up and was educated there in the 60s under the old colonial school system that had been so white-washed as to obscure any references to the first Australians, the aboriginal guardians of the land, sea and sky. This was a civilization that was over 50,000 years old and when Capt. Cook and the first fleet sailed into what is now Sydney harbour on August 22nd 1770, that culture immediately became endangered – the original Australians were vulnerable to European diseases as well as being easy prey for slavers and target practice.  It was a history that had been wiped from the pages of our school history books…but thankfully, no longer are white Australians ignorant to the facts of conquest, settlement and stolen lives and land. I’d learnt a lot over the past 5 years, all the way over here in Canada – another land conquered by Europeans. 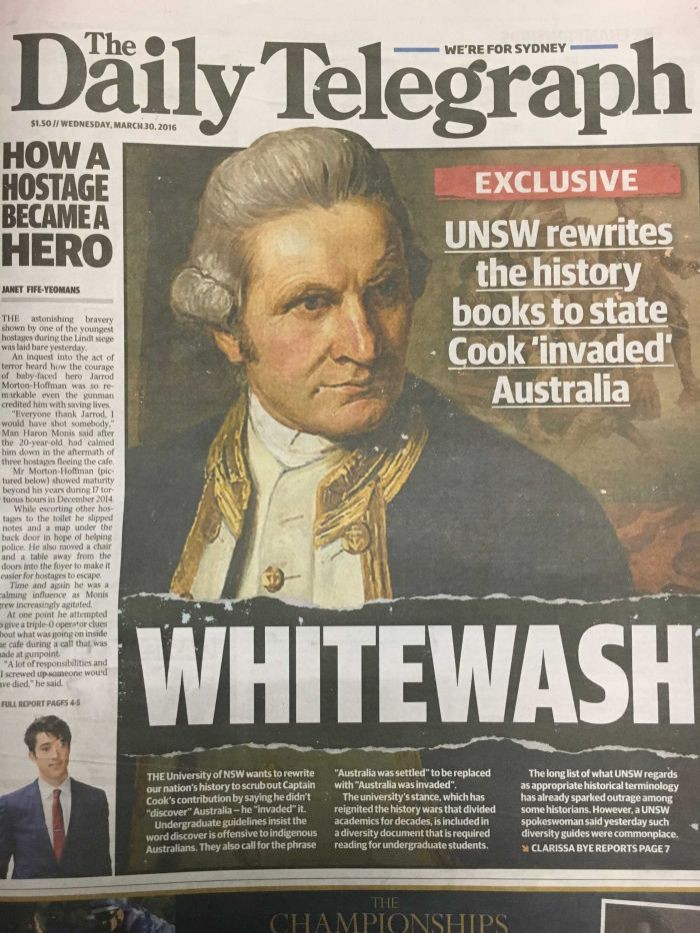 When my sister Jenny and traveling companion, Suzi, visited the museum, we saw an amazing collection of indigenous art and stories from more current times that illuminated the culture, life and legends …the spectacular canvas and bark paintings caused one to stop, stand and stare for a long time, taking in all the colours, textures and lines. 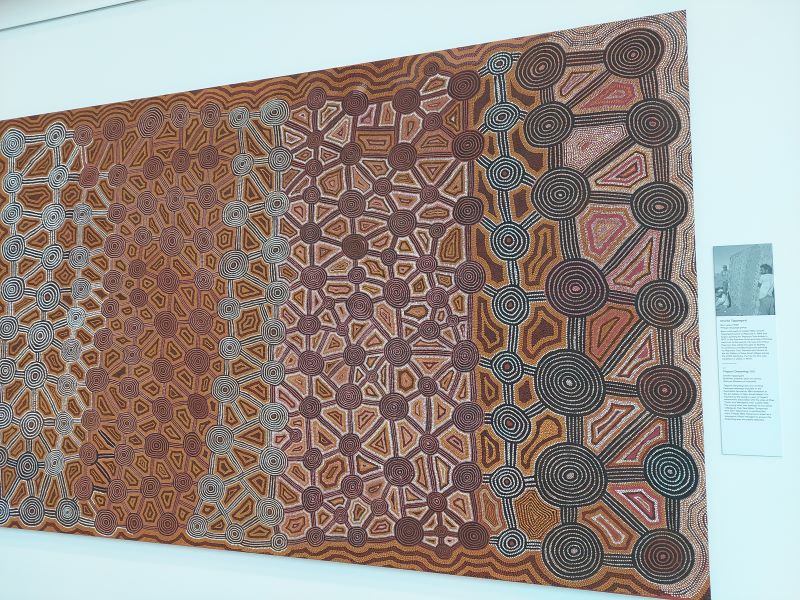 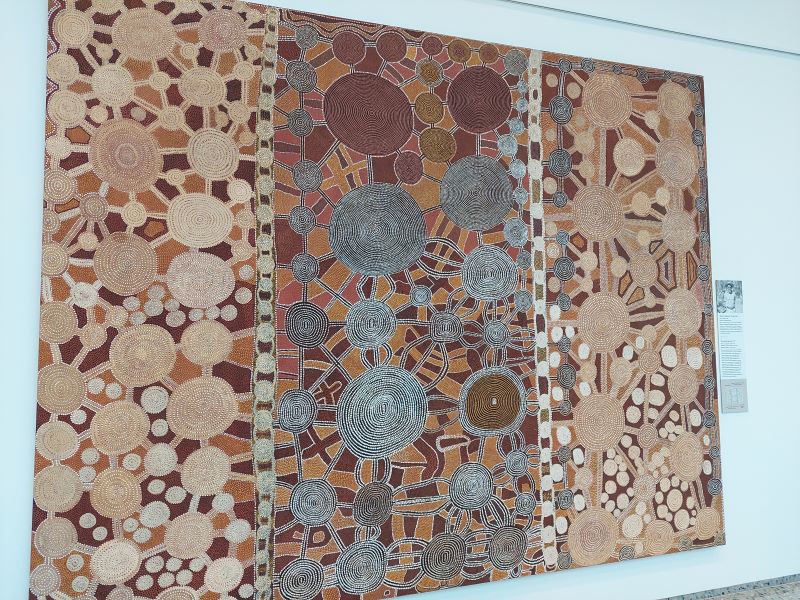 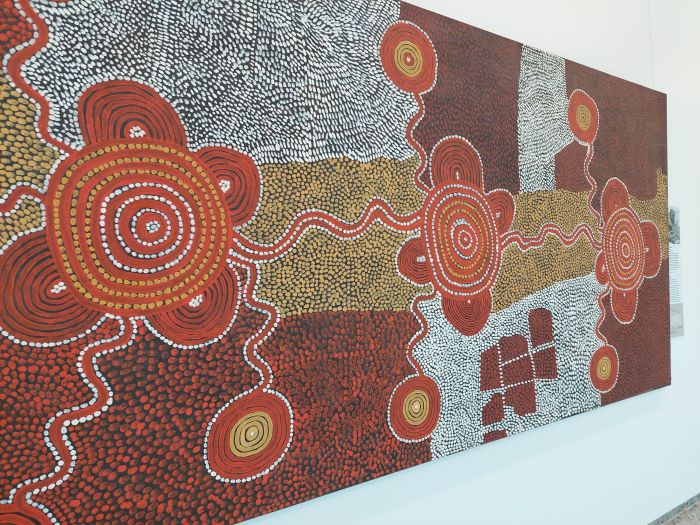 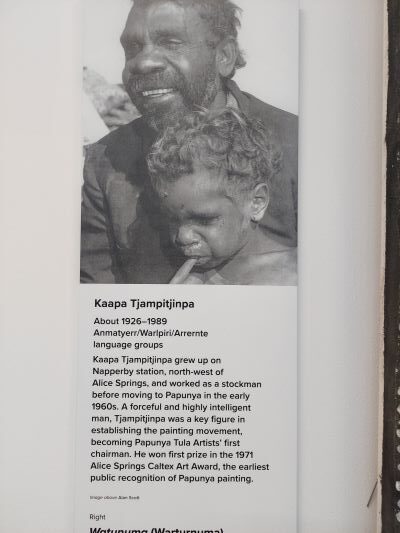 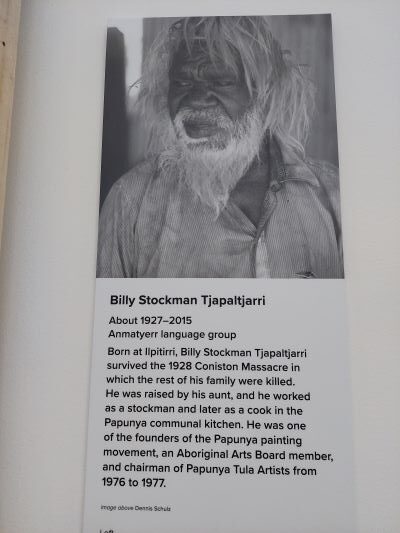 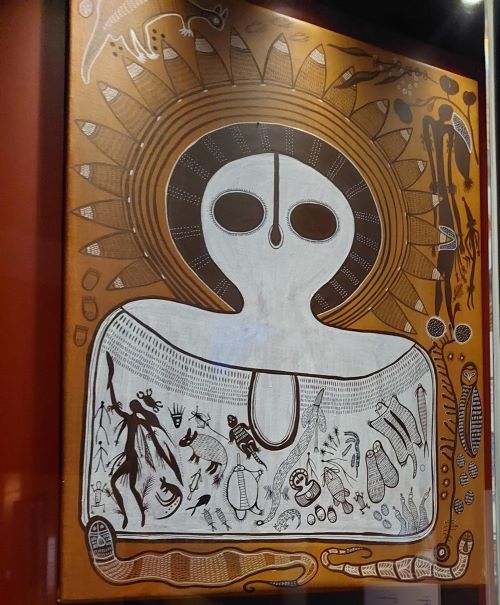 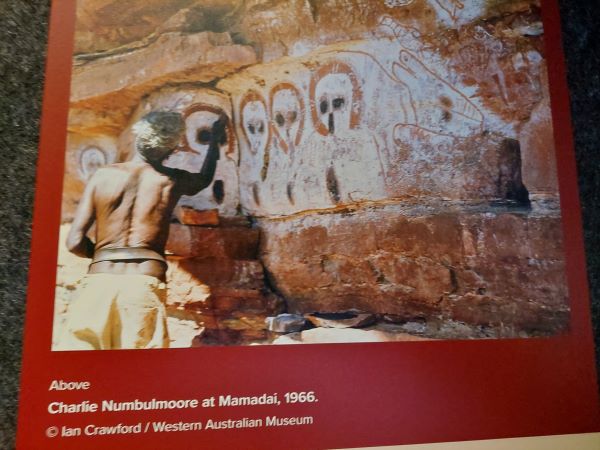 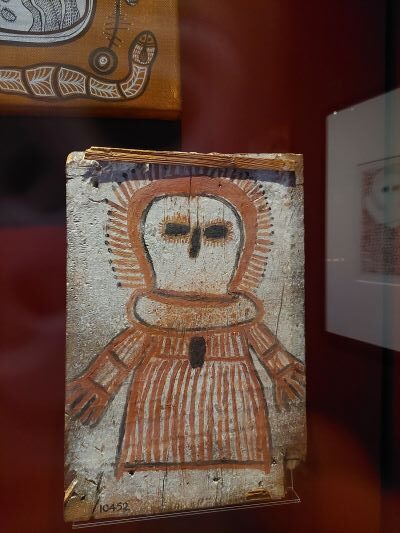 We checked out several of the other galleries and floors and of course, we had to play with the dinosaurs (Jenny, below) and the giant blue whale skeleton that I actually remember from the early 80s when visiting the family for Christmas. 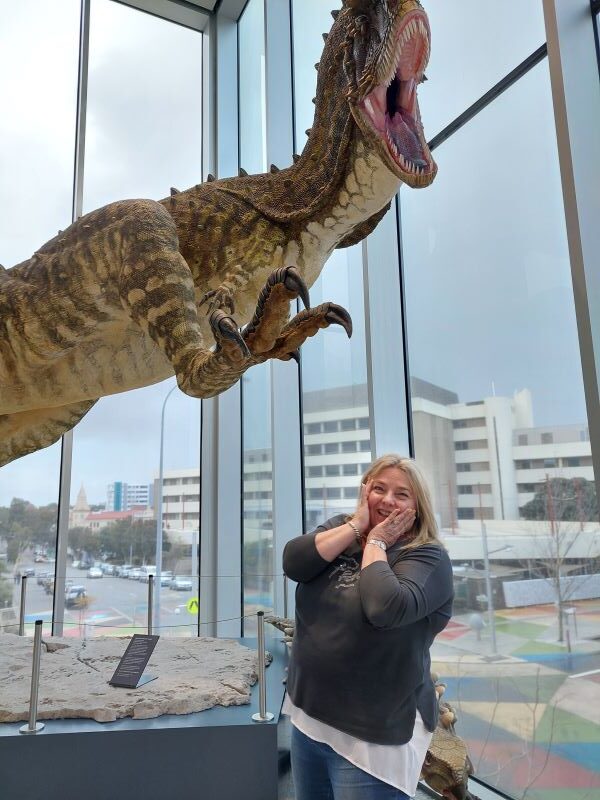 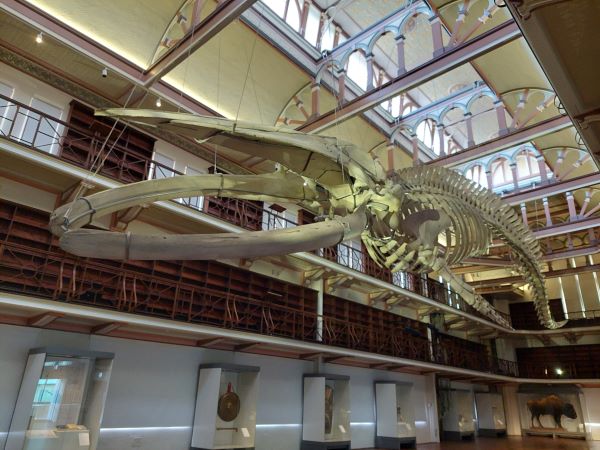 ….and what’s an Aussie museum without a great white? 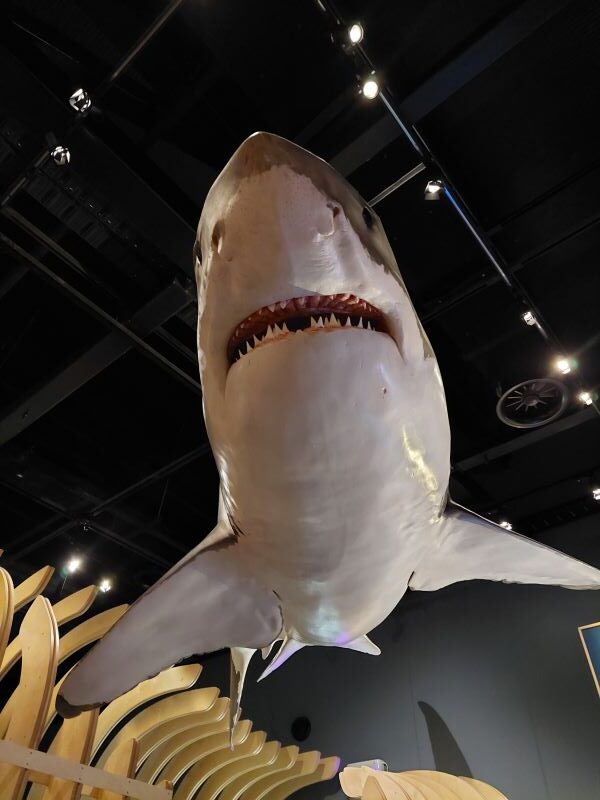 Another display that caught my eye featured stories and ephemera from the post-WWII immigration push that my family was part of…yes, we were “ten pound poms” – British families who emmigrated to Australia under a programme that required payment of 10 pounds per person (I got to go for free) and you got practically free passage Down Under, with basic accommodations upon arrival which were nasty, cold nissen huts on mud floors with wooden slat flooring, and communal baths, laundry and dining – awful things that we fortunately only had to stay in for a month or so before getting a nice little house in Melbourne. We sailed from England in 1959 on the Fair Sky, one of two Sitmar line ships that had previously been used as troop ships in the early 40s. The Gibb family (i.e. the BeeGees) came out about the same time on sister ship the Fair Star. Lots of posters, recruitment info and other bits and bobs from that time were on display and they brought back memories from my early childhood. Wow, what an adventure I had at age 5! 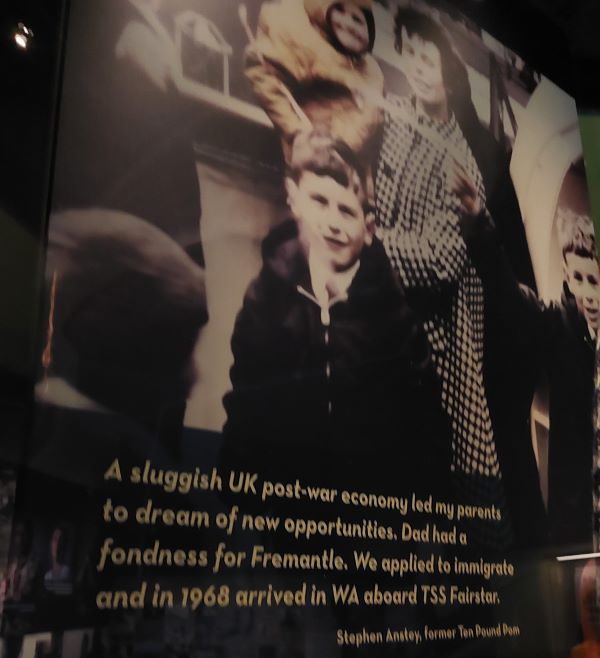 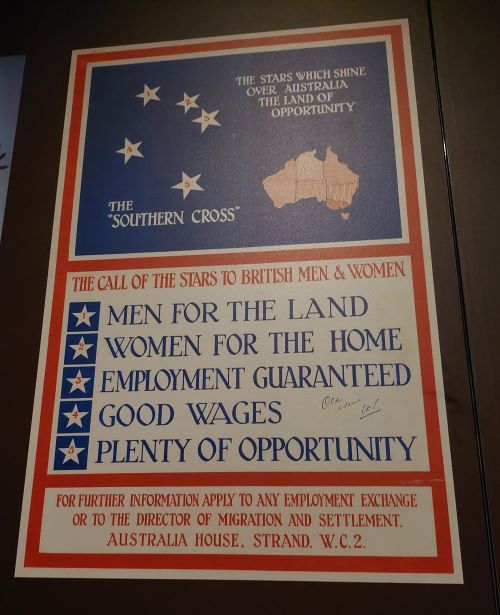 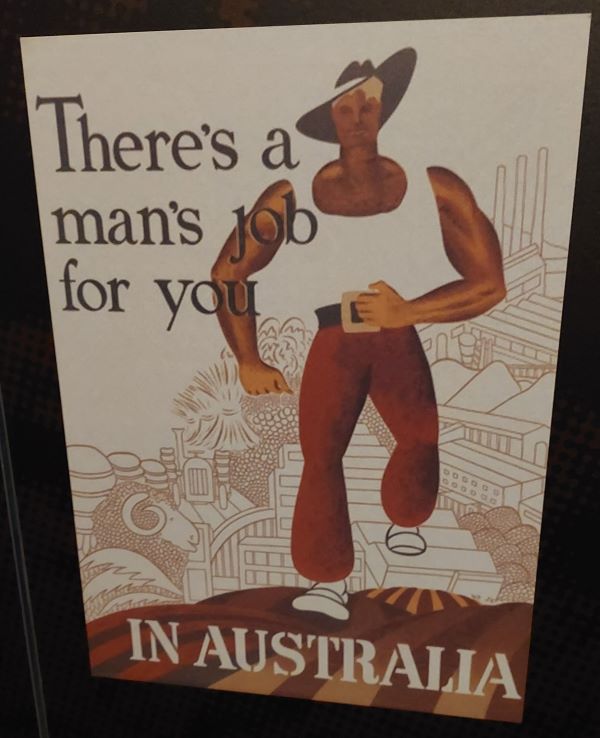 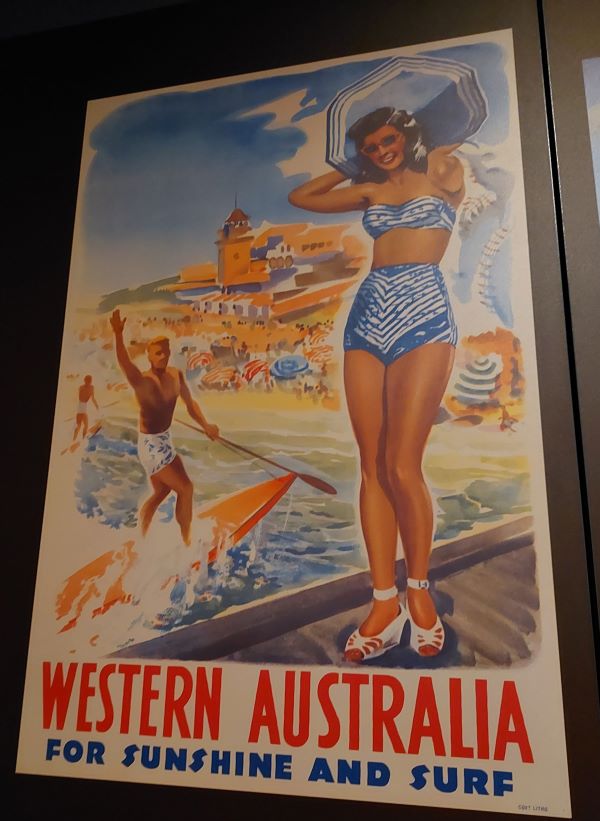 The museum also had a thylacene (Tasmanian tiger) in a glass case. They had been killed off back in the 20s and 30s and although there have been many recent “sightings” (just like Big Foot) there is no proof that the poor wee beasties still exist. I felt so sad looking into those glass eyes….

There were also meteorites I could touch as well as displays of rock formations, precious gems and night skies…what an amazing visit I had! 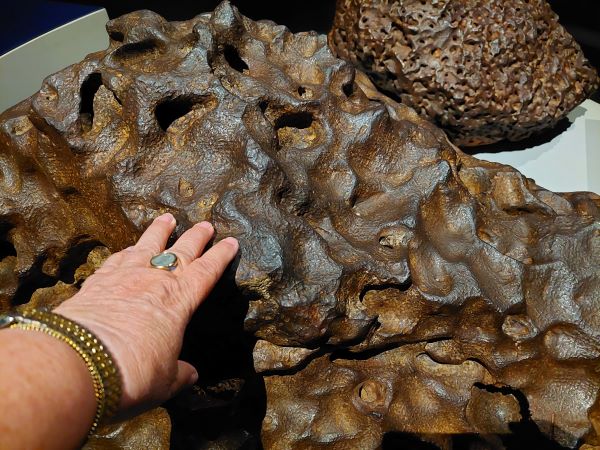 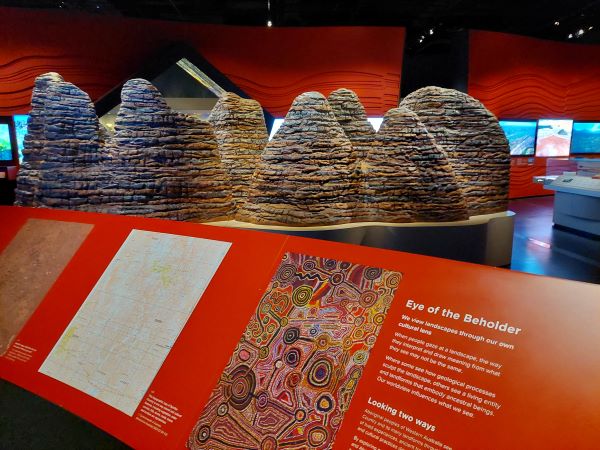 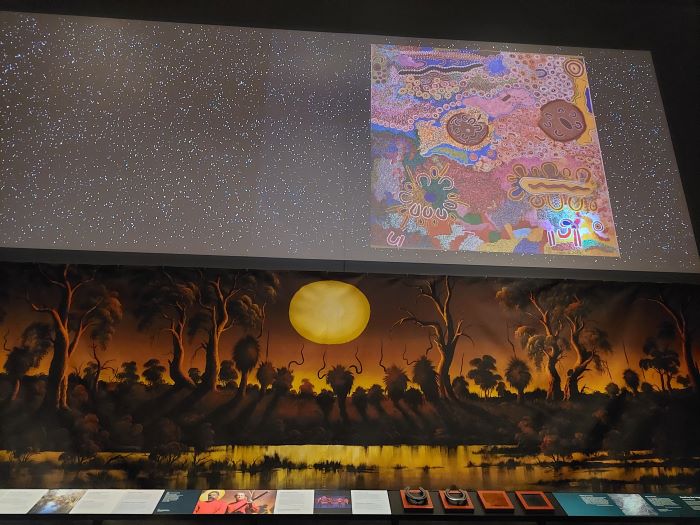 If you ever find yourself heading Down Under, do visit Perth’s museums and art galleries…you’ll see things you’ve never witnessed before.