Over the past few weeks, my TV has been dominated by ads for an exciting new feature film, Oscar-winning director Guillermo del Toro’s noir-themed “Nightmare Alley” which opens this Friday, December 17th. The film stars Bradley Cooper and Rooney Mara along with an outstanding cast of A-listers including my fave Aussie ladies, Cate Blanchett and Toni Collette. I was thrilled, then, to receive a message from the world’s leading mentalist duo, Tessa and Jeff Evason, telling me about their participation in the film, too. 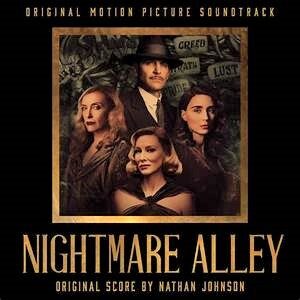 When del Toro was going over the script, he wanted to ensure authenticity for the various scenes showing how mentalists work with their audiences. So after a few international phones calls and emails, he was introduced to the Evasons who are considered the best working mentalists in the world! 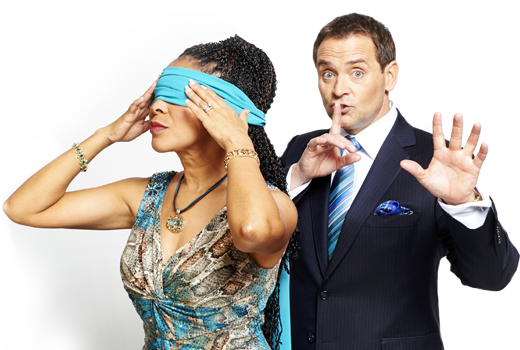 I met Tessa and Jeff several years ago and they told me that one day we would work together – yes, they nailed that one for sure…now here we are.  I spoke with them 2 days ago and asked them to share the experience of getting the phone call that has brought them into a whole new circle of friends and business opportunities.

Tessa & Jeff, tell me how you became specialist consultants on Guillermo del Toro’s latest Hollywood blockbuster, Nightmare Alley – how did he find you?  It was the summer of 2019, we were at our cottage in Canada. We got a phone call from the office of producer Miles Dale. He said Guillermo del Toro was on the other line and he would like to chat with us about his upcoming film, Nightmare Alley. We looked at each other, wondered if it was a prank call, but it really was Guillermo on the line. OMG! He was just so friendly and warm, and incredibly nice. He told us we had some mutual friends, Teller (from Penn & Teller) and Derren Brown (mentalist from England), and that when he asked them if there was two-person mentalism team that he should speak with, they both said we were the ones.

Without giving anything away, what did the Oscar-winning director ask of you?  Guillermo said that he was a huge fan of magic, and a member of the Magic Castle (private club in Hollywood, which we are also members of). He felt it was important that he remain true to the original story, and to also be respectful of magic history. Our task was to read the script (and every revision that followed) to provide notes about any scenes that pertained to methods, psychology and the performance of mentalism. On the first phone call, Guillermo  told us about his love and respect for magic. He was sensitive about exposure of secret methods, and he didn’t want to reveal any more than necessary in his movie, while keeping the storyline as authentic as possible. He wanted our perspective, as experts in the field of two-person mentalism, to advise and give insight line by line, scene by scene. Anyone who hasn’t studied what we have studied, to the depth and degree that we have studied and performed, has no idea what is possible with two-person telepathy. Some things in his original script sounded great and made for an interesting story, but just weren’t practical for a mentalism team to actually perform on stage during the era when the story takes place. Nightmare Alley was originally a novel by William Lindsay Gresham published in 1946. It has always had a degree of controversy among magicians and mentalists, yet it’s a film that we all love because we can relate to it in so many ways.

Del Toro is a big fan of magic and mind-reading – did you find him open to suggestions for certain scenes?  Oh yes! He was quite receptive to the many notes and ideas we contributed. We read quite a few revisions of the script. We had a blast doing it! You know for us it was really about keeping the scenes that involved mind reading and mentalism as realistic as possible, while at the same time remembering Nightmare Alley is a movie, not a documentary, and therefore it had license to bend the truth. Production had an unfortunate major delay due to the pandemic, and we imagine they had to make quite a few changes along the way because of that. We’re very keen to see the finished product.

You have created a great reputation in the corporate events world for presenting astounding feats of mentalism – have you been able to sustain work throughout the pandemic? Did you adapt by conducting events online?  We’re so fortunate to be working with some of the best entertainment agents and bureaus in the business. The agent who represents us, also represents many of the best magicians and mentalists on the planet. His name is Bill, and more than a business associate, he is a friend. He has given us so much encouragement and guidance before and during the pandemic. At first we were like everyone else, thinking life would soon get back to normal. As time went on, we resisted doing virtual shows. But then we tried doing a few guest spots on virtual charity events and we found that what we did worked really well virtually – sometimes even more unbelievable than live performances. Since then, we’ve been doing virtual shows regularly and we love it! Today, for example, we woke up early to do an 8:00am show for an audience in the UK, then later in the day we did a show for a North American group, and at 3:00am we performed for a group in Japan! We literally travel around the world to do 3 shows in less than 24 hours – how amazing is that?!

Do you think virtual shows may be the way of the future for corporate events and public shows?  We have no doubt that virtual meetings and events are here to stay. And fortunately for us, magic and mentalism is one of the best forms of entertainment for online platforms. Attendees become active participants, and the more interactive the show is, the more engaged the audience becomes. It’s not just about watching the performer, a big part of the appeal for attendees is watching each other, so Zoom shows work really well. Many of the groups we have performed for tell us they plan to continue doing virtual events even after they return to doing live events. During these strange times, we’ve thought a lot about the performers who successfully transitioned from Vaudeville theaters to film, and later to radio and TV. Who knows where we’re headed with virtual shows, but we do know this is a time where we need to embrace change. In many ways it’s an exciting era and we’re thrilled to be part of it!

“They turned a roomful of arms-folded skeptics into intrigued believers.” – Toronto Star

“Their mind-reading act was one of the most incredible displays this reviewer has ever witnessed.” – Evening Chronicle, Newcastle Upon Tyne 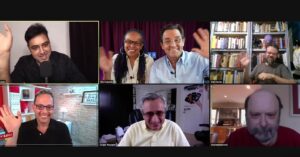 What is the most exciting thing about being involved with Nightmare Alley? Would you like to be the go-to experts for other films or tv shows?  Nightmare Alley is one of our favorite movies of all time, and Guillermo del Toro is such a legend. What an honor to be involved on any level! The most exciting thing about it is probably just to have had the opportunity and to be able to include it on our resume. Life is all about variety and having as many amazing experiences as possible. This certainly has been a significant highlight for us, and yes, we definitely would love to be the “go-to experts” for this genre for other films or tv shows or media appearances.

As 2022 is fast approaching, are you and your US booking agent planning any live events, corporate or public, next year or are you simply working on a day-by-day basis?  Yes, we are planning live events and have quite a few dates booked on our calendar. In fact, we’ve already done a lot of live events. Our first show back after a year and a half hiatus was in August at Lilly Dale in upstate New York. It’s a beautiful little town, actually a hamlet, where psychics and mediums live and work. It’s known as the world’s largest spiritualist community. Working there was another highlight for us. Since then, we’ve also done colleges and corporate events in the US and in Canada. Next month (January, 2022) we are excited to be appearing nightly for ticketed public shows at Liberty Magic, a lovely intimate theatre in Pittsburgh, PA. 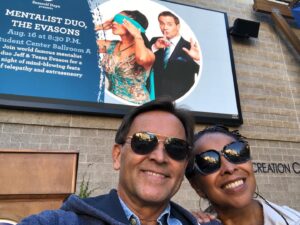 To book a live or virtual show, corporate event, or learn more about Tessa and Jeff Evason and their amazing skills, visit: www.evason.com and be sure to check out Nightmare Alley when it opens in a cinema near you.