Canada’s Queen of Scream, DARBY MILLS, has been earning her living doing what she loves – singing & performing for her loyal fans – since 1978. And as she’s said in a previous interview when asked if she’s feeling a bit too old for rock & roll, “I’ll talk to Mick Jagger then let you know…”  When I arrived in Toronto a few years prior to Darby’s professional debut, it was the height of the disco era and all the clubs pumped out Donna Summer, Barry White, KC and the Sunshine Band, and the Bee Gees. As much as I loved disco, the dancing, the dubious fashions and platform shoes, I also loved to rock and roll but I had to wait until the early 80s to hear that voice, that growling, loud empowered woman’s voice that belonged to Darby Mills, fronting the Headpins band. 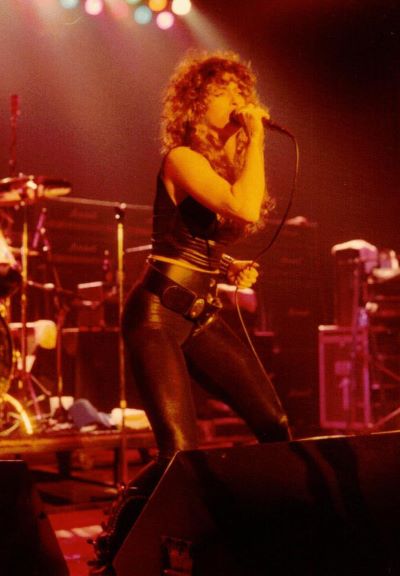 When you mention Darby Mills to anyone who’s a rock fan, you see a smile come across their face and a nod of recognition – this woman has earned her place in Canadian rock history. First working in cover bands, then a jazz/blues group and a funk/soul band in Alberta, finally accepting the invitation to sing with the rock band Steelback and heading back home to BC with them. Darby built a solid reputation on stage, fans flocked to see the band and its rocker chic out front. More gigs, more miles, more exposure to big international acts, both opening for and singing with, established Darby as a leading light in the Canadian music scene. Then came the Headpins…and then came the drama!  I encourage you to visit Darby’s website where you’ll find an in-depth history of her career and, in particular, her years with The Headpins (weblink at end of story).

I recently spoke with Darby from her home in BC and asked her if she’d share a few thoughts on her new Darby Mills Project (sadly sidetracked by Covid that has shut down Canada’s live music venues) and her experience as a woman in a male-dominated music genre…..

Darby, your first introduction to “performing” in front of crowds was as a young aspiring figure skater – did the discipline of sports training over a 12-year period affect your life and work ethic as a recording artist and stage performer?   Absolutely, the sacrifices made by myself and family were huge. As a competitive skater (pictured below with trophies almost as big as her) you miss out on many events outside the rink, even holidays, as training was first and foremost. No skiing or girls’ hockey (my Dad coached) and summer escapes where out of the question, but I did attend skating summer camps most of my teen years. As for the actual performance, it gave me the basis for nerve and confidence. Even though to this day there is still a tingle that hits me just before the show. 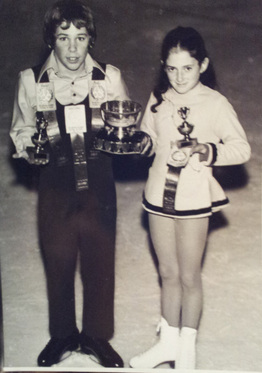 I understand as a youngster you spent many summers at your family’s cabin and your dad would sing as you all sat around the nightly campfires – apart from him, who were your early musical influences or inspirations?   Many many influences I’ve had over my life time. Early on, I listened to all the pre-70’s LP collection of musicals my parents had, then I got into Linda Ronstadt, Tom Jones, The Eagles, Ann Wilson, The Who and of course Led Zeppelin. It was at that point I was introduced to Janis.

You’ve been a part of several ground-breaking Canadian bands (Steelback, Headpins), honing your chops and touring throughout the 80s – what lessons did you learn during that crazy period that now allow you to take the lead with the Darby Mills Project?   In the late 70’s, after graduation I moved to Calgary where LIVE music was everywhere! Jumping back and forth from there to Vancouver many times until 1980 when I was recruited by the Headpins. My early Rock experiences consisted of searching out the correct band for my abilities and interests….and there where many!  And every time I got fired (lol) I learned more about the rights and wrongs as well as the prejudices of those in the industry. To me the answer was to become one of the guys best you could and grow a really tough skin. 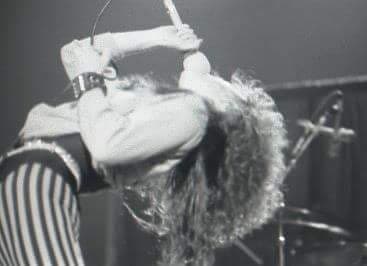 You’ve also toured with some of rock’s greatest bands such as KISS, ZZ Top, Whitesnake and Aerosmith – were you treated differently in such a male-dominated environment or were you accorded the respect you had well-and-truly earned?   Each band is different – I’ve seen actions that are kind at heart and supportive, as well as those that are destructive and mean-hearted, meant only to undermine the success of the opening act! 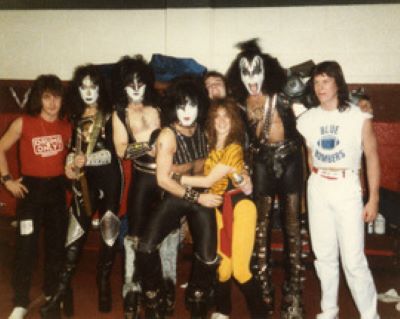 What is the significance of your “Letting Go” tattoo? Did you get that ink after you decided to take a break from your career in the early 90s?   I got the “Letting Go” tat to remind me that there was more to come.  My life was not all about what once was.  Sadly, I had been told that should I leave the Pins, I would never work again. Those people I’m guessing, had forgotten that I had already accomplished such a feat. In fact, I was the only member of the Headpins band except Brian “Too Loud” McLeod to do so!  I have earned 2 solo recording contracts, one to MCA America in 1986, and the second in 2001 with MCA Canada. Then in 2016, 36 years into a revised version of the Headpins, I felt it was past time to step up and bring something new to the table. This was not accepted by the members and I felt trapped in a downward cycle. At 56 years of age, I knew it was NOW OR NEVER. It was time again to take on that challenge.  Proudly I can say that I have now obtained a worldwide distribution deal with True North Records. 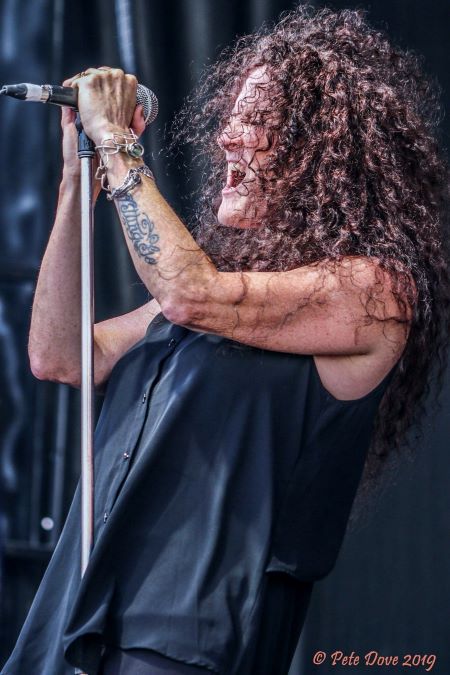 After spending time away from the stage and recording studio to raise your family and care for ailing family members, why now, why the Darby Mills Project?   After losing my recording contract with MCA in 2002, I felt it was time to start a family. Married 10 years at that time, my husband a I both agreed. 6 months into making that decision I got a call from a former Pins drummer. He asked if I would sit in with his cover band here and there, but shortly after that I found I was pregnant with our first child. Behind the scenes, I had been dealing with a lawsuit for the past 5 years. The Headpins had acquired substantial debt to the former manager and even though I had been fired from the band, I was personally being held responsible for its repayment. With no record deal on the table and now our first baby on the way, I gave up on all counts and let the government step in.  I felt the health of my unborn child was more important than fighting over money I neither had nor made from the band, so my public defender suggested I declare bankruptcy. Those where the only months I did not work as a singer/performer. I had worked at this profession for 44 years by that time.  And now I will say that Covid-19 has given me the longest break in my life time!

The Darby Mills Project allows you to reach out to long-time fans and play with musicians who had also experienced the highs and lows of the 80s and 90s.  How gratifying is it to find fans so loyal and vocal when you take the stage (pre-Covid days, of course) and have you had younger new fans reach out to you as well?  I guess they see themselves as the ones who where down in the trenches with us all these years. The Rock’n’Roll era of my generation will likely never be experienced in the same way ever again. What a time we had!! 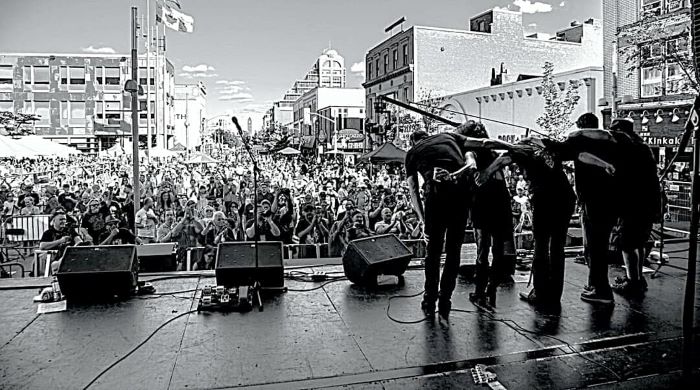 Obviously performing live concerts or touring is off the table until the pandemic is under control, so have you participated in any online concerts or have any plans to do so?   We spent more money than we made this last year doing a new 13 min video – six Headpins tunes mashed up into a medley.  We “The Darby Mills Project” get asked at every show, why aren’t you doing this or that song? My answer was always “because we are not the Headpins”.  It was never my intention to be the Headpins as a solo artist. They have a new singer and have worked steadily since my departure.  But the questions just kept coming, so the guys in DMP suggested we do a medley of Pins tunes so we can make the ticket buyers happy. DONE!  Paid for and ready to watch.  My thoughts for 2021 are that if there are no signs of live shows coming back into play, we’re working on another adventure that I’ll speak about when it happens.

I was sorry to hear of the tragic loss of your beloved father due to Corona Virus – what advice do you wish to share with your fans about health and safety precautions?   I spoke out publicly a few days after my Dad passed. Global TV news reached out to see if I would be interested in sharing my thoughts and it took some consideration as I know there are still so many who feel we were being lied to and the back lash would be harsh.  My family stayed away from Dad as he was in a long-term care home. We did NOT want to be the ones to inadvertently take the Covid virus into his care home. We followed the rules set by government regulations and called him every single day to stay in touch best we could. For 10 months he stayed safely tucked away from the world.  BUT THE WORLD GOT IN!  Covid landed in our little town with a handful of cases for a month or so but then after Christmas and, I can only surmise those who did not follow the stay home regulations, BOOM, three local care homes were on total lock down.   3 – 4 – 5 cases then 35 then 68 and now we hear about all the deaths. It is REAL and will take out so many more of us before we reach herd immunity.

I did get messages from the naysayers, such as “It’s a hoax”. There were those who said, “Why should we worry about the likes of him, we should think about all those small businesses that are out of business for the fear of losing the old”. Well, I TOO am part of the OLD! I TOO am out of business!  But I can still find compassion for those trying to be part of the solution rather than those who are looking only for fault and someone to release their frustrations on.  May the Universe find compassion for us all ‘coz boy, are we messed up!

Thanks, Darby, I really appreciate you sharing your personal, painful thoughts on dealing with the frustration and fear of Covid. On a happier note, I strongly recommend clicking thru to watch the 2018 Telus Original documentary on her career “The Queen of Scream”.

…and if you would like to follow Darby for news of upcoming releases and, hopefully, live shows later this year, check out her website where you can also purchase her music: www.darbymills.com 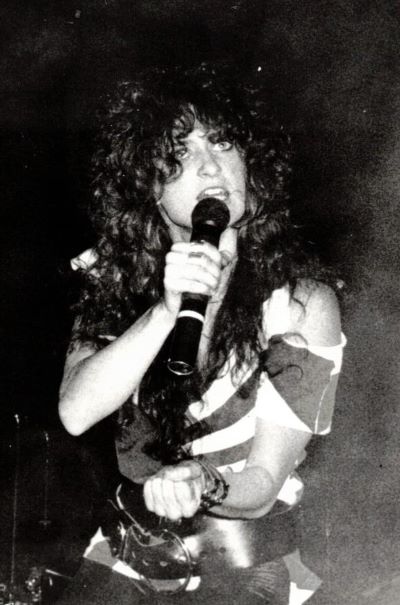