Move over all you insipid little girls with guitars…here’s the real deal: hard rockin’ singer/songwriter LAURA ROCK is heading back into the studio to record her 3rd album in as many years. 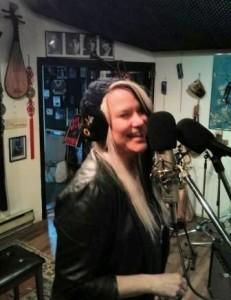 I met this talented lady a few years ago when she was launching her first solo album of pedal-to-the-metal, hard-driving contemporary rock music and she won me over completely upon first listening…I got hooked on her ballsy songs. But this lady is not just your typical “rock chick”; Laura is all heart and can frequently be found mentoring and encouraging young emerging artists, sharing her stories of performing live in clubs of varying sizes, recording studio protocols to dealing with dodgy club owners. This lady has been there, done that, written the songs…and she’s happy to impart her knowledge and expertise with those just coming up through the ranks.

Earlier this summer, Laura performed to a packed house at Toronto’s Hard Rock Cafe, proving once again that Rock’s Not Dead…. which just so happens to be the name of her current album and lead single! As she heads back into the studio, I sat down with her and asked a few questions….. 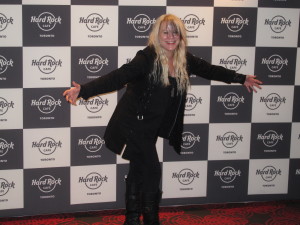 Where were you raised and has that influenced your music or performance style?
I originate from Newfoundland..let me count the ways that my home town of St. John’s has influenced me both musically & performance style!  Musically, growing up I was blessed with some great folk-rockers along with many other genres.  Newfoundlanders are know for being friendly and outgoing. Our storytelling abilities and sense of humor shines through – in the way we speak and in my case, write lyrics and sing.  The term “front person” comes to mind.  People say that my Newfie hospitality and genuine love for what I do translates well to stage.

Do you play any instruments and how do you compose?
My instrument is my voice.  Regarding composing, well I can hack a guitar but I’m not all that great.  For the most part, I am a lyricist. It all comes to me in waves…it feels like it’s channeled from somewhere else, I swear! I often hear guitar riffs or drum beats in my head but I am absolutely blessed to work with a fantastic producer, Brian Gagnon, who helps interrupt my ideas.  Sometimes I go in with the lyrics and he creates the music – sometime I add some musical ideas or sometimes he has the music and my lyrics are created afterwards. Sometimes it’s a simultaneous process.

Who has been your guiding light in the industry?
Wow, good question.  I think I have always followed my own heart, but one “guiding light” in particular was the late great Nik Beat of CIUT’s Howl! radio show.  Nik’s incredible belief in me and my music lead me to L.A. and many other places. He introduced me to so many talented people in Toronto that I otherwise would never have known.

Remind me of your previous albums and the hit singles off each…and haven’t you won some pretty awesome awards, too?
My first album was called Law of Attraction, which was released in late 2011 and my current album, Rock’s Not Dead was released towards the end of 2014.

I’m happy to say that my music is played on many internet stations across Canada, the US and the UK – as I say: “all the web’s a stage”.  Regarding awards, well, I’m proud to mention that I was nominated for 6 HMMA awards in L.A.  (Hollywood In Media Awards) which has resulted in some amazing opportunities and business introductions for me. I was nominated for the following songs:
November 2014 Lightning
July 2013 Law of Attraction
Mar 2013 98.5
Jan 2013 Get Your Rock On
July 2012 Blindsided
June 2012 Light My Fuse

You’ve played some pretty great venues over the past few years….
I’ve played many venues in Toronto as both a cover band artist and as a original project.  Sadly, a lot of clubs have shut down in this city but more recently I played the legendary El Mocambo before it was sold and closed, and in June we did our official CD Launch for Rocks Not Dead at the Hard Rock Cafe. 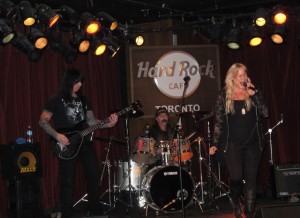 Can you tease us with a little news about your next album?
I’m heading back into the studio to work on my third album but I’m still promoting Rock’s Not Dead which I sadly had to put on hold due to the death of my mother, father & best fiend all in a very short span of time last year. But you know what they say….what doesn’t kill you makes you write more music!   So this next album is about love, loss, and the key phrase…Bait & Switch! 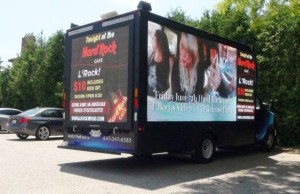 You spend a lot of time mentoring emerging young artists, sharing knowledge about the business of making music. For you, what is the most rewarding aspect of that?
The most rewarding aspect of that is simply watching them grow as an artist.  After speaking with them about several subjects, particularly “critical opinions” – as you know, we live in a society that always has something to say about whatever we do. I always like to let young artists know that there will always be a critical opinion and I offer ways on how to deal with it, how to protect your creative ego.  Once they overcome this, they soar….that’s the fun part to watch.

In a city the size of Toronto where there are a lot of performance stages, why aren’t we seeing more accessible multi-genre music stars rising from the ranks? In other words, how easy/hard is it for young performers to play on a main stage AND make money?
The music landscape has changed drastically – it’s not just localized to the city you live in.  With access to the web, you are your own record company, your own manager, and this is the concept I try to instill in to younger artists. You can make money in the music industry if you’re motivated enough to put in time and effort into your art.  The simple fact is, if you love what you do, there are going to be hurdles in the way and you will have to compromise, especially when it comes to the financial part of the business.  Having said that, I think no one should play for free…know you’re worth and stick to it. 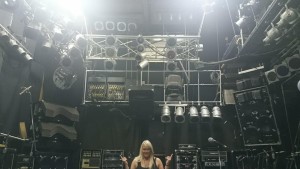 Any ideas how we, the fans, can help improve the music scene and support the artists?
You can do this simply by buying their music online or showing up at live venues. At the end of the day, the music business is a business and everyone needs to make a living.

So what’s in the future for Laura Rock?
Music is a way of life for me, it’s not a destination…I try to live in the moment for the most part, because I feel so good making music…it’s like heaven on earth.  But having said that, I do aspire to write for other artists or help/mentor those who need a little guidance.  I love films so having one of my songs in a movie soundtrack would be the biggest dream come true!

You can learn more about Laura Rock, buy her music and keep up with news on her new album and upcoming shows by visiting: http://lrockmusic.com/