CONNIE BOYD is a Canadian magician, inventor, producer and director, with a background in dance, theatre and circus. She is known for physically demanding, artistic magic such as the “solo” guitar suspension (the World Magic Awards 1999) and an up-side-down straight jacket escape over a bed of nails (Shanghai Magic Festival 2012). Connie has appeared on television shows such as “Masters of Illusion,” “the Best Magic of Las Vegas” and the “World Magic Awards”. She launched her magic career in Las Vegas in 1987, eventually starring & headlining in production shows such as the Folies Bergère at the Tropicana Hotel, Jubilee at Bally’s and opening for celebrity headliners such as the recently departed comedian and TV star Louie Anderson. Connie was named Best Cabaret Magician in 1999 at the World Magic Awards in Los Angeles and the “Prix du Public” at the Grand Prix du Magique in Monte Carlo in 1996. 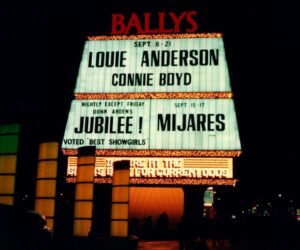 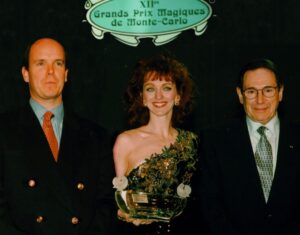 In 2006, Connie was asked to consult on talent with a cruise company in Europe which led to a new career producing, mentoring and directing multiple shows on cruise lines internationally, casting female magicians as the lead performers. In June 2020, she created Magical Women, a YouTube channel dedicated to documenting some of the best women in magic in the world in all facets of magic. She writes a monthly Magical Women series for Vanish Magic magazine and has recently been featured in Genii magazine and MagicSeen in the UK.  She also created a conference on Digital Transformation for Magic in 2020 for “United Magicians for the World”. More recently, she launched a new series on the YouTube channel called Blast from the Past which features vintage videos of female magicians from the past.

Being such a busy lady, I was thrilled to get a chance to chat with Connie and ask her about her amazing career and all the women in magic she has worked with or met. What a great conversation we had!

Connie, you’ve created a wonderful web portal showcasing women in magic from around the world and their incredible talents. What inspired you to generate this platform?  Pre-pandemic, I was extremely busy and happy producing, directing and mentoring magic shows and talent.  I was in Italy when the lockdown started there in March 2020.  I had magicians on cruise ships returning to Italy from winter seasons in the Caribbean and South America.  Contracts were cancelled and my talent were repatriated to their home countries on three different continents.  My own magic shows were literally “frozen in time”, indefinitely on “ghost” cruise ships at sea in the Mediterranean.

For the first time in thirty plus years, I didn’t have any magic obligations or projects to complete.  After much reflection, I realized that there wasn’t a source or resource anywhere in the world, dedicated to documenting and supporting women in magic.  I decided to create the Magical Women project and the “Magical Women with Connie Boyd” YouTube Channel, dedicated to represent female magicians past and present. I started by reaching out to female magicians I knew and everyone was enthusiastic about the project and willing to participate.  Being a credible woman with success in magic helped; I understood the challenges many of the world-class magicians encountered as women in unconventional careers and in under-represented groups.  Thanks to the pandemic I had a rare opportunity to record talent that would not normally be readily available.

Tina Lenert, a fabulous magician and one of the first magicians I interviewed, provided an apt quote that summed up how I felt at the start: “life begins at the end of your comfort zone” (Neale Donald Walsch).

Most of us know all the famous men in magic from David Copperfield to Penn & Teller, Doug Henning, Siegfried & Roy, way back to Houdini, Blackstone and of course, The Amazing Randi – why don’t we hear more about the women? There must have been some great female artists over the past century?  One of the accomplishments I’m most proud of is participating and collaborating on the VANISH International Magic Magazine’s special edition “Female Magicians through the Centuries” that was published in February 2021 as a FREE publication.  The essay and photos were provided by Sébastien Bazou, the publisher of “ArteFake” an entertainment e-publication in France.  VANISH’s publisher and editor is a great advocate of diversity and generously created the graphics, layout and free Special Edition. You can view it here: https://bit.ly/3BrqWQx 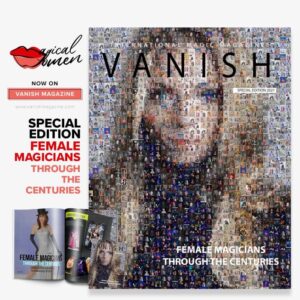 As you will note from the VANISH Special Edition women in magic have existed through time.  It’s true that female magicians are still less than 2% of the magic community, but it’s important to note that the women who have committed to careers in magic are making a huge impact and statements that cannot be denied.

One of the wonderful elements I’ve discovered through the Magical Women project is the increasing number of female contemporary magicians.  French magician Léa Kyle was the first female magician to place in the finals on “America’s Got Talent” last season and she’s currently headlining in Las Vegas.  Venezuelan magician Dania Diaz was a finalist on “Spain’s got Talent” and was the first Latina female to reach the finals on “America’s Got Talent: the Champions” in 2019.  Amanda Nepo is the youngest female magician at sixteen years old to fool Penn & Teller with magic that she invented. Australia’s Helen Coghlan is a four-time “Penn & Teller Fool Us, FOOLER”.  The list goes on and on and it’s a truly exciting time for women in magic.

You have over 30years experience performing illusions and entertaining audiences with your prestidigitational skills – when did you first realize this was the career for you?  I discovered magic in Las Vegas.  In fact, I debuted my first magic act there in the late ‘80’s.  My magic story is unorthodox.  My professional background pre-magic was theatre and classical ballet, with aerial and juggling circus skills in the mix.  I was performing in Las Vegas at the Riviera hotel in “SPLASH” with a juggling act when I discovered magic.  I fell in love with the levitation magic of the headlining magician and puppeteer, Barclay Shaw.  I studied and watched his mesmerizing performances nightly.  Barclay was the catalyst for my magic career and it was he who suggested that I become a magician. 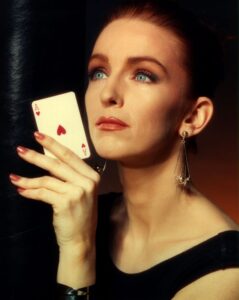 Starting magic from zero wasn’t easy, but I discovered magic uses every skill I have and I’ve learned more.  Good magic is a complete, theatrical artform, it taps into my creativity, physicality and artistic vision.  I have been fortunate, able to invent magic and create magic effects that are specific to me and my skill sets.  It’s challenging, it’s frustrating, but it’s also been a perfect fit.  I was determined to succeed and it helped that I had exposure and access to some of the very best magicians and entertainers in the world.

You’ve interviewed and reviewed so many ladies of magic for your YouTube channel, magazines and blogs. Who are the outstanding magicians we should watch for now that theatres, casinos and clubs are opening up after Covid?  There are SO many, I am pleased to report.  Here’s the list that pops into my head:  Léa Kyle, Daniz Diaz, Billy Kidd, Carisa Hendrix, Laura London, Alana, Helen Coghlan, Josephine Lee, Alexandra Duvivier, Amanda Nepo, LeRoya Sanford, Kayla Drescher, Krystyn Lambert, Tessa Evason, Katherine Mills, Anchal, Jen Kramer, Ekaterina and many, many more.

Magic overcomes all language barriers and appeals to all ages – what is your favourite audience composed of…families, grown ups, corporate shows?  Since 2000, my magic shows have been on tour internationally on cruise ships, on television and in theatres.  My favourite audience is a theatre full of a mix of families and adults; theatre and magic savvy and first timers.  It’s a mix of people who wish to suspend disbelief and believe in magic for that moment in time and even those who wish to discredit it.  The biggest reward is hearing the audible gasp when they react to your magic and performance. They can’t help themselves and respond with surprise, and that’s my favourite moment, always. 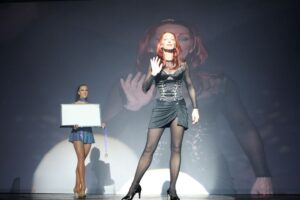 Who has been your role model or favourite magician (male or female) over the years?  First would be Barclay Shaw for helping me to discover magic, for never considering a woman couldn’t be a magician and for encouraging me to pursue magic.  David Copperfield for his inspiring work and performances which encouraged me to work harder.  Don Wayne, inspired me to create and to understand how to use magic techniques and the psychology behind the magic.  Joanie Spina was brilliant on and off stage, she was instrumental to discovering who I was on stage and for staging many of my best acts.  Recently, it’s Diana Zimmerman for her tireless support, encouragement and wisdom.

Without giving away any secrets, Connie, what has been your most astounding, amazing stunt…and, conversely, have you ever had anything go wrong?  The number I most known for, that’s a signature piece, is a number I created called “Floating & Flying”.  The magic is powerful as I am costumed in a simple leotard.  In the midst of a classic floating ball magic act, I fly into the air to retrieve a floating ball over my head.  This is a moment in my show that I receive the “magic gasp” I mention earlier. 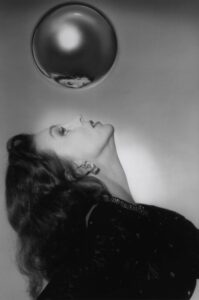 Has anything gone wrong? There have been many things, I have fallen into a band pit, been trapped in a trunk due to a missing key, forgotten my lines, forgotten which show I am performing, vaulted from a suspension on a rocking ship, spun like a top when a technician plugged a 110 volt prop into 220 volts, I’ve had the audience in hysterics with a urinating bunny and I’ve almost been snapped in half by a drunk volunteer.

What upcoming shows, videos, live tours do you have coming up for yourself? As the theatres and tours re-start there is great interest in a touring, all female magician magic show, I am very excited about that.  At the moment there is a shortage of North American female illusionist performers.  With my shows en route from Europe, I’m on the lookout for new up and coming talent to develop, cast and mentor. 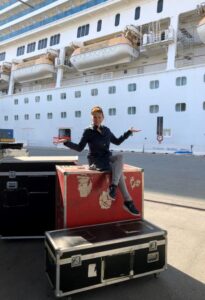 I’m currently working on a Magical Women coffee table book about contemporary Magical Women performing today.  This is in conjunction to the research and monthly Magical Women articles I’ve created for VANISH International Magazine since August 2020.  Lastly, I’ve created and am developing several magic routines to compliment my motivational speech about “finding the positives within negatives to reinvent yourself.”

And finally, is there a magic school you would recommend for ladies who would love to pursue magic as a career?  In Canada there’s the Canadian Association of Magicians (CAM) is a good start to find magic clubs near you:  https://www.cammagic.org

Jeff McBride has the “McBride Magic and Mystery School”.  Jeff’s wife Abigail is very hands on with the program and Jeff has mentored several female magicians. https://www.magicalwisdom.com

Any other news or information you’d like to share, Connie? Next month is Women’s History Month.  If you have sources to post the link for the free VANISH Special Edition, “Female Magicians through the Centuries” that would be great to share.  Also, the “Blast from the Past” playlist from our YouTube channel pays tribute to many vintage female performances.

Wow…I had no idea there was such a community out there for female illusionists. It was such a pleasure speaking with Connie and now I can’t wait to see one of her shows and experience the mystical world of magical women.

Connie is busy packing her bags and gathering her fellow magical ladies together and taking to the road for more shows, post-Covid. 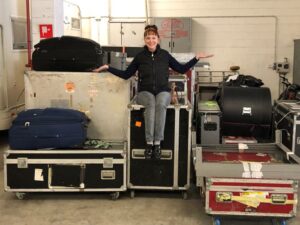