Since arriving back in Toronto from my 2 months traveling around Australia’s most remote towns, I’ve been obsessed with maintaining contact with new Down Under friends as well as Aussie social media news and information, especially about filmmakers and musicians. One story particularly piqued my interest as it dealt with both those subjects: it told the story of documentary filmmaker, Tristan Pemberton, and his passion project – a new documentary film that told the story of an indigenous rock band as they toured the Australian outback in some of the country’s most remote places.

Gravel Road tells the real-life story of Jay Minning, singer-songwriter of the most isolated rock band in the world, The Desert Stars. His four-piece bandmates are traditional land owners of Spinifex Country in the Great Victoria Desert of Western Australia, which is home to the last nomadic people in Australia.  From their home in Tjuntjuntjara, the film follows Minning and his band’s first ever tour as they rock their way across the Western Desert with songs of hunter-gatherer life. Their elders survived the British atomic testing (at the infamous Maralinga site) and the band’s profound connection to culture spans back 2,000 generations. With customary Spinifex reciprocity, Minning shares the journey with East-Coast friends, a band named The Re-mains, providing a rare glimpse into his country, his culture, his music and his extraordinary everyday life.

Producer/director Pemberton (shown below with editor Harriet Clutterbuck, ASE) previously collaborated with the community of Tjuntjuntjara and The Desert Stars for many years. He produced short films The Cheater and Maku Digging; the documentary Ara Wankatjara Nyinanyi (The Good Health Story) for the Australian Broadcasting Corporation’s Outback Stories show; a short for Spinifex Health Service Ukuri Wiya (Ganga is Bad); the music promo for The Desert Stars homelands tribute Tjuntjuntjara; and most recently The Tjuntjuntjara Story, a staff recruitment film for the Paupiyala Tjarutja Aboriginal Corporation (PTAC). 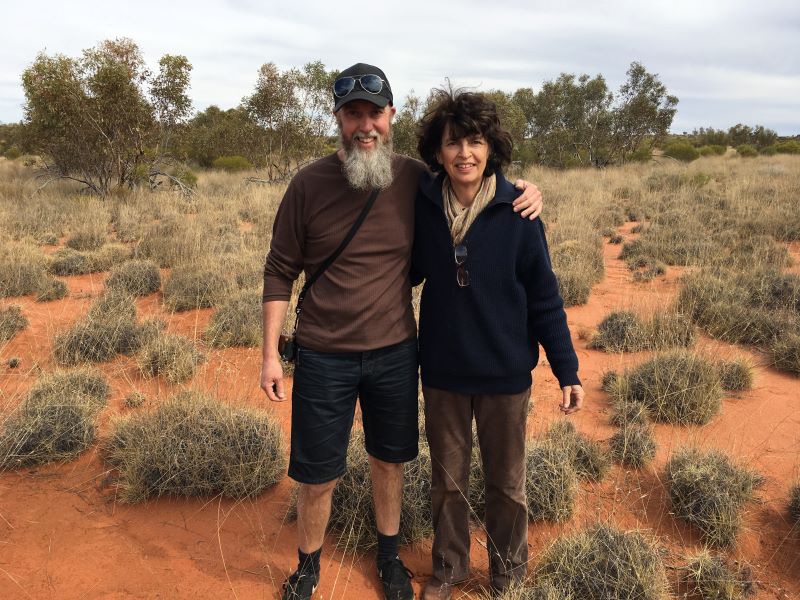 It’s taken some 3 years to research, film, edit and finally get the documentary on screen: Gravel Road is now screening around the world at international film festivals and last month it was screened at CineFest Oz film festival in Western Australia. The band made a surprise live appearance after the film screened, delighting theatregoers. The audience demanded so many encores, the band ran out of material! Offers for them to appear nationwide are now pouring in.

I recently e-chatted with Tristan about his journey with Jay and the band, his relationship with the Tjuntjuntjara community, the filming process, the hardships of filming on the road with a small crew and then pulling it all together in order to launch at film festivals across the country…..

Tristan, you’ve worked on several previous projects involving the remote Tjuntjuntjara community – what was so special about Jay and his band’s tour that fired your imagination?  Jay and the Desert Stars are traditional landowners of Spinifex Country where, in 1986, the last hunter gatherer nomadic people in Australia and possibly the world – a family of seven – made contact for the first time. My journey to research the facts around those events started over ten years ago, and my passion to tell that story with Tjuntjuntjara Community – with the community’s full support – hasn’t waned. The fact is, Spinifex People, due to their isolation, have managed to keep culture very intact and remained some of the most traditional people left in Australia, and probably the planet. So the Spinifex People have a unique place in Australian and world history, and Jay writes his songs, tells his stories, from that perspective. That in itself fascinates me and lights that fire in my belly to share Jay’s stories and music through film. 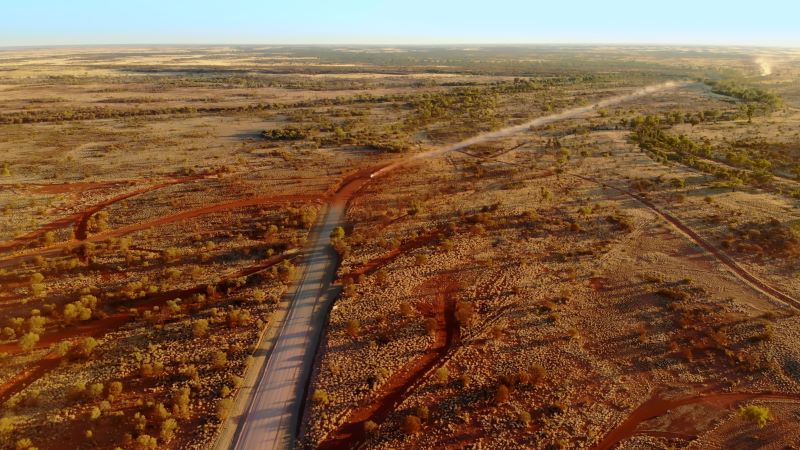 Were you a fan of The Desert Stars/Re-Mains prior to shooting the film? Yes. I’d first heard of the Desert Stars on my second trip to community where I was running a filmmaking workshop. Together we’d made a short film, called The Cheater, and during post-production we were looking to add music to the edit. A couple of people involved in post immediately suggested we add some Desert Stars music as they were the local rock band. A CD appeared shortly after and I heard their music for the first time.  It was such a perfect fit, with songs that reflected culture of life in the desert and the Spinifex experience. And what great songs. Jay really is a gifted songwriter, weaving his life experiences into catchy melody and poetry, with a great 80s rock feel.

Did you discover new truths about the community, the country, the musicians or yourself over the years it took to get the story to the screen? As long as you keep pushing yourself, I don’t think you ever stop learning about yourself and the world. Filmmaking is hard work, and it never really gets easier. But it’s made easier by the contributions of others. They say it takes a village to raise a child, well the same can be said of a film. Without its village, its own little community, most films never get made, or have a chance to find its audience once completed. So as a filmmaker one of the most important jobs is to surround that story idea with its own community who’ll support and protect it and help it grow into something bigger and stronger. It’s been incredibly humbling to watch as so many have invested time and energy into Gravel Road, with their only reward the hope that it, and the band, will succeed in finding an audience.

How important was the input from local elders when telling the band’s story and that of the community itself?  Absolutely critical. Without input from elders and the collaborative support of the Tjuntjuntjara community, there’s simply no way I could, or would wish to, tell Jay’s or any story that belonged to the Spinifex People. Afterall, they are not my stories. I just see myself as a conduit, using my skills to walk with and work with Tjuntjuntjara community so together we can share their stories. Collaboration only works when there’s genuine ngaapartji ngaapartji (reciprocity) and cross-cultural consultation and understanding. Jay was the first person – outside the post team – to see an edit, and subsequent edits. And once complete, a private community screening was arranged where all community members were invited to attend. I would never allow a community film to go out into the world before the community got to see it first so they are happy that it’s not mis-representing their story, or presenting anything of cultural concern that shouldn’t be seen or heard. Once Gravel Road had Tjuntjuntjara’s community blessing, it then started its journey beyond the desert into the world.

Did you encounter any resistance from Jay or the musicians when shooting scenes that perhaps revealed more on a personal basis than perhaps they wished to share? And if so, how did you strike a balance with creative differences?  Not really. The band were very open to allow me access to their lives during the time I was travelling with them. Occasionally I’d be advised not to record a certain landscape, or capture a particular location – but that was always for cultural reasons which I completely respect and had no reason to challenge.  At the same time, I was careful not to push people too far. As a documentary filmmaker you have to use your intuition – or simply ask – to work out when the people you’re recording are getting film fatigue. Sometimes people just want a break from the camera and have some personal space, so I was always acutely aware to allow that to happen when needed. (Jay is also an artist who shares stories through his paintings- see below)

After watching the trailer, I can see how all that bumpy dirt road traveling must have put a strain on both your vehicles and your own bodies – how many flat tires, broken axles, empty petrol tanks or back aches took their toll on the musicians and crew?  So as not to spoil the film, I guess you’ll have to watch Gravel Road to really answer that question.  Though I will say it certainly was uncomfortable sitting in a bus driving over corrugated road for hours and hours, days and days on end. On one of the days sitting on the bus I calculated that if we were hitting 50 corrugations (vibrations) a second, it works out to be 180,000 vibration per hour or about 1.5 million vibrations after 8 hours of driving. That plays havoc on electrical and mechanical equipment, not to mention our bodies. 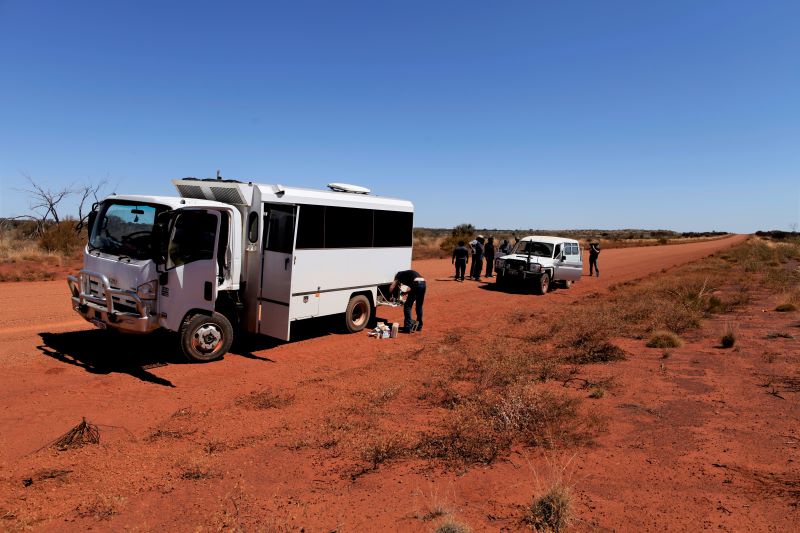 As director, cinematographer and co-producer of Gravel Road, how time-consuming was this project and did you have any sort of personal life throughout production? During the shooting phase, I didn’t have much of a personal life at all. Shooting documentary is all consuming, especially when working in remote locations. There was no sound recordist, or any other crew, with me so I had to be on, or ready to go any time during the day and most nights. Even when exhausted you have to be ready to get going. You never know when you might need to capture that critical piece of the action which will help to drive the narrative forward. It’s hard work!

How do you hope audiences respond/react to the film both in Australia and when the film hits international screens?  We had our world premiere at Phoenix Film Festival, Arizona USA in April. The feedback from audiences there was very positive with loads of lively and engaging discussion after every screening. Later in April Gravel Road appeared at Poppy Jasper International Film Festival in Morgan Hill, California (just south of San Francisco) where it won Best Documentary Feature award. There, too, we had great discussions around the film, the band and the Spinifex People.  So far, the feedback we’ve had has been really positive and audiences have enjoyed Jay’s passion for his music and enthusiasm to share his stories. We often get comments about how great the band play and what wonderful, catchy songs they perform. There’re often comments about the landscape that the band passed through. It’s a feel-good film which shares a really positive story about how the Spinifex People have survived atomic testing and the ravages of colonialism to rise above, keep culture strong and succeed.

Thank you, Tristan, and good luck with Gravel Road as it rolls out into wide release in cinemas around Australia and the world.  If you want to learn more about the documentary, visit the official website or follow Tristan and the film on social media: 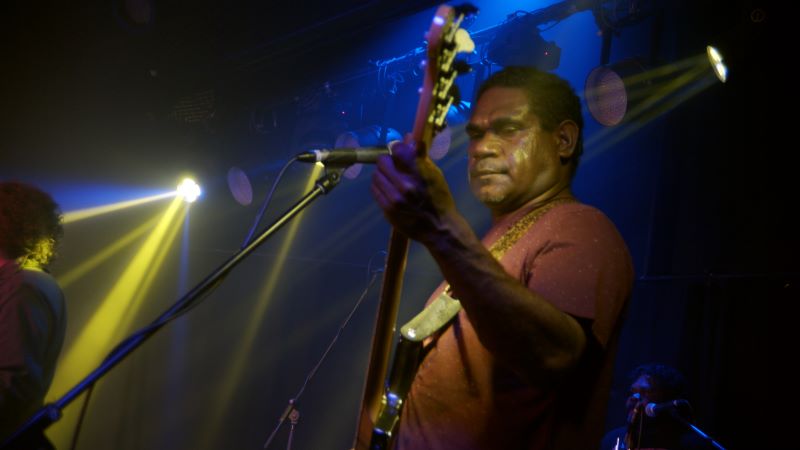