When I heard that tv personality and music media insider Kim Clarke Champniss was writing his autobiography covering his childhood and teen years in England and his 70’s adventures in Canada, I knew I would be reading much about my own history…but with just a few geographical differences. I was born at the end of 1953, a few months before Kim came into the world, so we were both exposed to the same popular music of the Brits and American rock-and-roll in the mid to late 50’s. But while Kim experienced the whole mods’n’rockers evolution in person, I would only hear about it from far off Australia to where my parents had emigrated in ’59. Unfortunately my family would end up way out in the bush, cut off from any form of entertainment other than 4 radio stations and two television channels that only broadcast from 11am until 10pm. Kim, as he tells it in his book, was right there at ground zero in London for the changing social moods and music styles, going from bovver boys to The Beatles. So it was with a touch of envy that I turned the first page…..

Champniss writes like Jackson Pollack painted: bold colourful strokes with trickles of familiar music history, lobbing in droplets of names that suddenly come back to me – Régine, Slade, Lyons tearooms and Marc Bolan. Then once the reader arrives with Champniss in Canada’s far north, his descriptions of living and working for the Hudson’s Bay Co in the isolated, snow-bound Eskimo Point during the early 70’s will have you pulling a blanket up around your ears – so cold, so windy and wild you can almost feel the biting gusts of Arctic air whirl around you.

This book definitely leaves the reader wanting more…and fortunately, there is a lot more as Champniss ends this story just before he heads to Toronto to join the new music and video tv station that we came to know as MuchMusic. 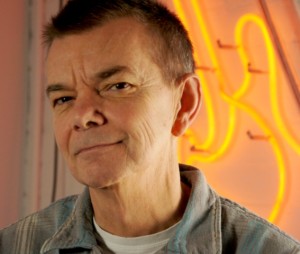 Not only is this an autobiography with exciting adventures we can relive with the writer, it is a great music history lesson to be shared with younger readers. I first met Kim when he had arrived in Toronto from Vancouver whilst hanging out at renowned music publicist Richard Flohill’s apartment in Cabbagetown. I remember thinking what a bright, energetic young man Kim was, full of music trivia and fascinating stories of his many adventures around the world. I cannot wait for the next chapter when I know he’ll have some great tales to share.