For the past two years, award-winning Canadian artist BRUCE K.LAWES has been visiting the Gettysburg Battlefield national park during the annual July 4th celebrations, painting historical military scenes and portraits from his tent studio on the side of the battleground. As the thousands of dedicated volunteers reenacted cavalry charges, skirmishes and arm-to-arm combat in front of him, Bruce created several haunting portraits of Union and Confederate troops and war generals while the crowds of park visitors and July 4th celebrants watched on. 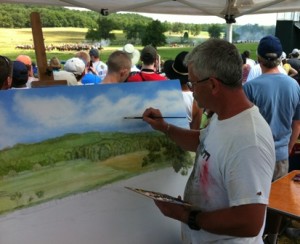 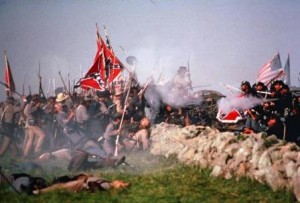 This year, Bruce decided to stay home and complete his most exciting Civil War era portrait to date – that of President Abraham Lincoln in quiet contemplation of the speech he was to deliver the following day in Gettysburg.  Bruce placed his subject in the exact room of the now historic Wills House where Lincoln wrote his address and slept the night prior to delivering what we now know as the “Gettysburg Address”.  I asked Bruce to share his thoughts and inspirations for the portrait which goes under the hammer at this year’s prestigious Coeur d’Alene Auction of Fine Art in Reno, Nevada, on July 25th.

What was your experience like last year at Coeur d’Alene and what/who introduced your work to the prestigious auction?
As this was my first time in this auction with a relatively untested subject matter for me, although I felt the portrait of Custer was done well (see below), the unknown of whether anyone else felt the same was very nerve racking. When I first arrived in Reno, Nevada, the day before the auction and met the auction officials/gallery partners, my worries vanished very quickly when they said that there had been a lot of interest in my painting. In fact, the owner of the Texas Rangers baseball team was one notable individual who was going to be bidding on my painting. 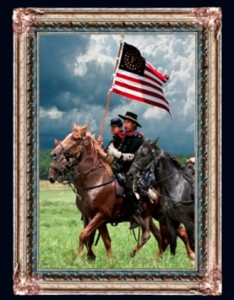 What first drew you to the Lincoln/Gettysburg Address subject?
My interest in Lincoln, as with many other people, is his persona and his accomplishments as the most revered President in American history. The significance of the date 2015 is that it represents the 150th anniversary of his assassination and the Gettysburg Address being the most significant speech in the rebirth of America during the Civil War, made it an important subject to paint.

You were given a lot of assistance with the actual location for the painting – the David Wills home – can you tell me who supplied photos and narrative descriptions in order for you to place Lincoln in an authentic setting?
While consulting my friend J. David (J.D.) Petruzzi, award winning Civil War author and historian, as to how to portray Lincoln in a unique authentic setting, we discussed the Wills house where Lincoln stayed the night before delivering his Gettysburg Address. With creative and historical minds working, the result was to paint him the day before the Address and in a second painting show him during the day of the Address (this painting is in the planning stages). The problem that I was now faced with was authentic reference points for the bedroom Lincoln stayed in at the Wills House. Fortunately, the house was designated as a museum and the whole building and surrounding buildings in the square have been maintained as it was back in 1863. Being from Pennsylvania, J.D. and his partner, Cindy Mullins, a dedicated Lincoln historian, kindly offered to travel to Gettysburg and take some reference photos of the bedroom (see below) with the guidance of my mental sketch or vision. 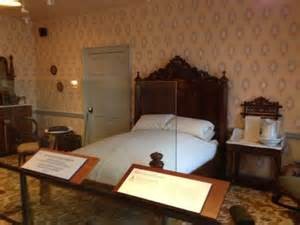 You first sculpted a clay bust of Lincoln in order to commence work – how did this help you? Can you explain your painting process?
As the photography of the day was poor and only in black and white, I decided to sculpt Lincoln’s bust in order to position him in a pose that best suited my idea and I could also cast the light source accurately to show where shadows would fall. I used this 3-D model just the same as though the President was there in front of me posing in a sitting for a portrait. 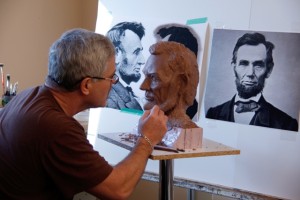 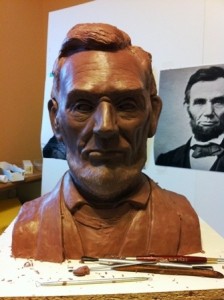 Will that bust also be for sale at a later date?
Originally I thought I may cast it in bronze but that has not yet been decided…

In your mind, who would be the ideal buyer of this Presidential portrait, and why?
Ideally, I would like the buyer to be a public gallery so the painting can be seen by the masses in order to continue Lincoln’s legacy; so that we may continue to learn from our past mistakes and successes. 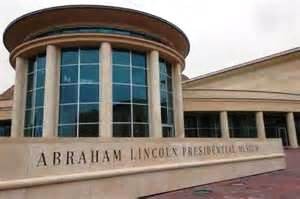 I’m also grateful for the testimonial from leading Lincoln expert Dr. Gabor S. Boritt, which adds considerable weight to the authenticity of the painting’s location and subject matter: On November 19th, 1863, there were thousands of people waiting to see and hear Lincoln. Some stayed up all night raising quite the ruckus. But in the morning, when the President looked from the Will’s House where he stayed, he saw the respectful crowds. And today, in 2015, we have at last found a painter whose artistic skills and talent match that moment in history. Bravo, Bruce Lawes!  –  Gabor S. Boritt, Emeritus. Robert C. Fluhrer Professor of Civil War Studies; Director of Civil War Institute; Chairman of the Board of The Lincoln Prize

Apart from this unique Lincoln painting, what other projects are you working on and at what upcoming shows and sales will your work be featured?
I’m presently completing my painting for the July 16l “Masters In Miniature Exhibition & Sale” at Trailside Galleries in Jackson Hole, WY, that will be very different from the Lincoln project as the subject matter is wildlife (“Savannah Sunrise” see below). Also, with the recent history being made with Triple Crown winner, American Pharoah, one of my galleries wants me to paint all three jewels in the racing crown, so keep watching for my next creation.