A couple of weeks ago, I had the pleasure of attending the taping of IN THE ROOM (above), a new actors’ round-table style chat show soon to be on television, produced by Jason Barbeck and Rafael Kalamat of RDG Entertainment Inc., a new Toronto-based film and TV production company.  I spoke with both partners, asking them about their inspirations for launching their company and Jason’s interview was published on my blog back in late February – here’s Rafael’s interview where he shared insightful comments about the Canadian TV-scape and his aspirations for RDG.

What first inspired you to become an actor?  My parents told me that as a child I was always impersonating other people. They supported me and my ambitions by enrolling me into acting classes at 8 years of age – I was already on stage and auditioning for theatre and film. I will never forget auditioning at the age of 10 for Roman Polanski’s “Pirates” in Montreal; at the time I had no idea it was a big deal, however, I will never forget the process and what I learned on that day…I use that experience 30 years later.

What was your first paid acting job?  I did a number of travelling theatre performances from the ages of 14-17 when I attended the Thomas D’arcy McGee Centre for Fine Arts and Performing, where I studied theatre with Ted Cooney and Virginia McGrath. We studied and acted on stage and had our expenses paid – I guess that was the first time I was given money and thought to myself I could make a living. It was a tremendous learning experience being exposed to the arts and studying art, theatre, dance and music. Theatre being my major and moving on to Film and Communication studies at Dawson College.

When did you realize you could actually make a living as an actor & why? I never realized I could, to tell you the truth, but when I moved to Vancouver in 1994 and started working in film, television and commercials via a principal agent, things seemed limitless when you are 20+ years old! However, it was great seeing actors on set such as Christopher Walken on Excess Baggage and David Duchovny on X-Files…it certainly was where the original tag line of “Hollywood North” was introduced as it seemed that every week there was a Hollywood feature being shot there. It was a great time of growth for me as I made my way down to L.A. – only to have all my dreams crushed. From 2004-2006 I was in talk radio for CJAD on Montreal and finally moved to Toronto in 2006 to rekindle my career. (Rafael pictured below, between shooting scenes)

What prompted the move to found RDG Entertainment Inc. and what brought the two of you together? Over the last few years, Jason Barbeck and I have crossed paths many times in the film and television industry as actors, stand-ins, drivers. Actually the first time we ran into each other was on the set of Flashpoint when we were actors’ doubles working as driving specialists. Later, we found ourselves cast as constables on the award-winning Canadian drama Murdoch Mysteries. It seems Jason and I had a lot in common and we were tired of waiting for the phone to ring. We both had many industry connections and access to scripts, talent, producers, cinematographers, crew and mostly we had a common vision of building a production company from the ground up and being able to one day produce a feature. In less than one year, it looks like we will be shooting our first feature this summer, not to mention countless other projects which include our original Canadian television series called In The Room which features Canadian actors and film & television professionals in a roundtable conversation. These casual conversations were put together to showcase Canadian talent and help build and support the Canadian star system, educating while entertaining the viewers.

How do you see RDG impacting the Canadian film & tv scene?  I don’t think we’ll reinvent the wheel, however, we hope to create quality content and bring like-minded people together to develop projects that are not only Canadian but also have an impact on how film and television is seen. With today’s viewing market changing, there are so many multi-media platforms and we intend to use all of them. In addition, Canada and the United States are great markets for content distribution, but our mandate since our inception is how we can showcase our product to the whole world. The global market is a great place to show that Canadians make amazing stuff too!…and we are on our way. 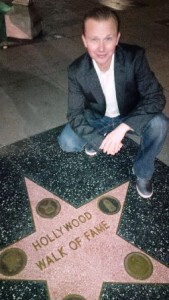 What are your current/upcoming projects? Currently, we have an original round-table series called In The Room (recent tapings pictured below), we’re always working on the indie level helping everyone who has a script or a project to get off the ground. Our grass roots understanding of production has helped us develop several teams of production so we can help someone’s short movie come to life or can even produce someone’s demo reel. I think no matter how large our company gets, the core vision is to help kick-start indie projects, just as others in the film industry have helped us get started – it’s all about giving back. Our first feature, called Adam’s Testament, is slated for the summer of 2015, and we have several other projects in the works including an untitled Toronto television crime/drama series. 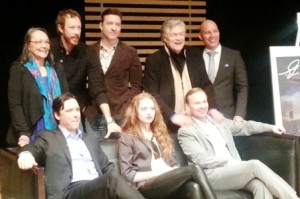 What are your dreams and aspirations for RDG’s future as well as your own? Our dream has always been to make features and being able to travel the film festival circuit. That being said, as a struggling artist for so many years, I am grateful and blessed to have the opportunity to pursue my dreams. I would love to leave a legacy for my wife and son and to me, family always comes first. Jason and I are both husbands and fathers first, yet everyone we work with becomes our extended family and treat them with the respect they deserve; as this industry is very difficult, we strive to keep a positive atmosphere and want people to be creative and be able to showcase their ability as artists and human beings through their work. (below…Jason & Rafael flank actor Philip Moran)

Are you looking for new actors, writers, directors and if so, how do people reach you? We love networking with like-minded people. I personally love reading scripts and trying to make connection with the right people if RDG can’t help. I came from the mindset of always searching for work as an artist, and now that my cup is overflowing, I find that paying it forward is very gratifying.  (Below, Rafael and RDG biz partner Jason storm the beaches of LA and dine at famed Yamashiro’s in the Hills) 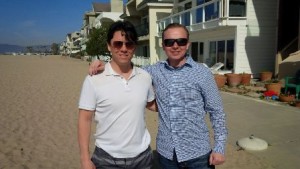 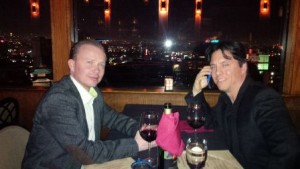 Over the past 25 years, Rafael has worked in all areas of the film and television industry – as an actor, stand-in, photo double, background, stunts, special skills performer, voice, transport driver, locations, writer, producer, director, casting, wrangler, wardrobe, etc.  Focusing now on producing, writing and acting, the future offers more directions and his life and business experience has allowed him to find an exciting niche in the film and television scene.